The Story of St Martin's

St Martin’s: a community of prayer and welcome in the name of Jesus Christ since before 597AD

St Martin’s is the oldest church in continuous use in the English-speaking world. Click here to see the Timeline of St. Martin's

The oldest part of St Martin’s church was built during the Roman occupation of Britain. It is uncertain whether at first the building was a church, a mausoleum, or something else. 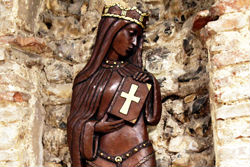 Bertha was a Christian princess from Tours in France. About AD 580 she married Ethelbert of Kent, who was a pagan Anglo- Saxon. Ethelbert restored St Martin’s for her, and she prayed here regularly. Ethelbert became king of Kent and ‘over-king’ of all the kingdoms northwards to the River Humber (200 miles to the north).

Augustine was a Benedictine monk in Rome. He arrived here in AD 597 with 40 companions, including Roman monks and Frankish interpreters, to preach the good news of Jesus Christ. St Martin’s was Augustine’s first base for his mission. “Here, according to the Venerable Bede, they first began to assemble, to sing the psalms, to pray, to celebrate mass, to preach and to baptize, until the king was converted to the faith and gave them greater freedom to preach and to build and restore churches everywhere.” (Bede’s Ecclesiastical History, AD 731).

Bede writes of the enormous impact made by the message of Jesus, by the holy lives of the monks, and by miracles which confirmed the message. “Great numbers gathered each day to hear the word of God, forsaking their heathen rites and entering the unity of Christ’s holy church as believers.” Pope Gregory, who had sent Augustine from Rome, wrote to Augustine telling him not to become swollen-headed because of the extraordinary things that God had chosen to do through him.

Needing more space, they extended St Martin’s to nearly its present size, using Roman building methods and reusing some Roman bricks. The largest part of the building (the nave) was the first Anglo-Saxon structure made of mortared brick and stone instead of wood. Ethelbert soon granted Augustine more land in Canterbury, where he founded the Abbey and the Cathedral. Augustine became the first Archbishop of Canterbury. He died in AD 604 and was buried in the Abbey.

The east end of St Martin’s church was extended in the 12-13th centuries and substantially altered in the 19th century. The church tower was added in the 14th century. It has three bells, the largest of which was made in 1393.

St Martin’s remains in use for Christian worship, prayer and mission, as it has done ever since Augustine arrived in the 6th century.

You can find out more about St Augustine and some of his contemporaries in these powerpoint presentations: