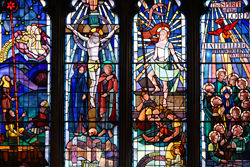 Why ‘St. Paul’s without the Walls’?  The word ‘without’ once meant ‘outside’.  This Church was built ‘without’ (outside) the city walls now just across the ring road.  We refer to it here also as just ‘St. Paul’s’.

Why was St. Paul’s built?  The origins of St. Paul's Church and the reason for its existence lie in the proximity of the ruins of the Abbey (now called St. Augustine’s).  It is believed that it was built as a chapel by the abbey for local people and overseen by them as a place of worship and instruction.

In 1300 however there was a controversy between the Abbey and the Archbishop Robert Winchelsey in regard to the right to present a priest to the ‘living’ (install a priest paid to minister here). 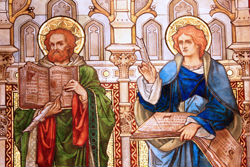 The Archbishop seems to have won.  Parishioners had the right to be buried in the Abbey cemetery and in 1591 a burial area was created in Longport (now closed and since 1951 an open space at the bottom of St. Martin’s Hill).

Sometime in the last quarter of the 13th century the Church was enlarged eastwards creating the space now occupied by our organ ( built in 1901).

In the organ space, and sadly no longer visible, there is another piscina and a three tiered seat or sedilia for the priest and deacons. 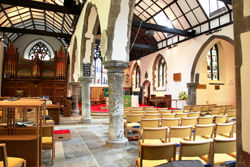 A further extension took place around 1320 southwards creating a second larger aisle and a great east    window.  The  south wall was pulled down to be replaced by Purbeck marble pillars and a further wall.

St. Paul's from the Reformation to the 19th century. The Reformation and the Dissolution of the Monasteries c1536-1540 had a serious economic effect on the City of Canterbury.  The destruction of Thomas Becket’s shrine meant no more pilgrims and a great loss of income. In 1570, a Visitation (inspection by senior clergy) recorded that there were 90 houses in this Parish and 243 communicants.  In 1681, St. Paul's was united with the ancient church of St. Martin.

The worshippers at St. Martin’s were ordered to view St. Paul’s as ‘their proper church’ 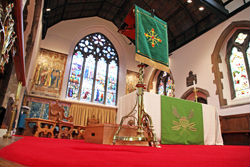 (fortunately, they seem to have stayed at St. Martin's!). (Both parishes continued side by side until the 1970s, when the Parish of St. Martin & St. Paul was formed with one Parochial Church Council).  By the early 19th Century St. Paul’s was described as ‘a small, mean, building’ and in poor repair.  All that would change with the advent of William Chesshyre!

The print of St. Paul's in 1828 shows a rather shabby building in a busy street. In 1842   William John Chesshyre arrived as Parish Priest.  He was a wealthy man who resided in his mother’s house at Barton Court (now Barton Court Grammar School on St. Martin’s Hill/Longport). 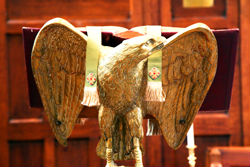 Chesshyre died in his fifties in 1859 but in his 17 years in the Parish he oversaw a dramatic extension and refurbishment of St. Paul's under George Gilbert Scott as well as the founding of St. Paul's School (closed and demolished in the 1960s).

The tower was substantially rebuilt and a third aisle built southwards creating the space we enjoy today. An elaborate altarpiece was created in the sanctuary with the choir seated in the traditional chancel under a decorated ceiling.  A new font replaced the ancient one now stored in the church's cellar in three pieces.  Whatever nave seating existed was replaced by pews provided under a national church scheme to help clergy pew their churches. 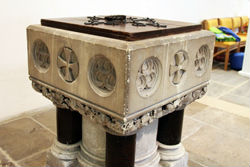 In 1985, Canon Reg Humphriss oversaw a reordering (programme of interior changes) project that brought the altar forward, removed the altarpiece and moved the choir to the north aisle.  The font was also moved from its traditional place at the back of the Church to its present position. This opening up of space reflected changes in worship patterns but it meant the loss of the chapel and the positioning of the choir rather close to the very powerful organ.
In 2012-2013, a further reordering took place.

The key element of this was the replacement of the fixed pews with modern seating allowing creative use of space and the restoration of the chapel. New choir stalls enabled the choir to be positioned further from the organ.  In line with current developments new technology has been installed including a screen that descends from a tie beam over the chancel.  The chancel  itself was levelled, extended and recarpeted, and new digital lighting installed.  We are now able to offer traditional and innovative worship and welcome people to use the church for concerts and conferences, using also the Parish Centre built in 2005.