The following extract about the architecture of St Martin's Church is taken from the book The Buildings of England: East and North East Kent, 3rd ed, written by John Newman, published by Yale University Press and used with consent. Copies of the book are available in all good bookshops price £19.95 or by contacting sales@yaleup.co.uk. 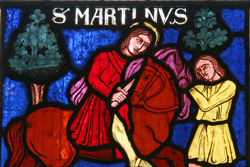 The pilgrim to St Martin's comes to see not only the church where St Augustine and his followers first worshipped, but what may even be part of the church where queen Bertha, Christian consort of the pagan King Ethelbert, came to pray before the missionaries from Rome arrived. Bede describes the situation of Bertha's church quite clearly: "Erat autem prope ipsam civitatem ad orientem ecclesia in honorem sancti Martini antiquitus facta". That is where St Martin's church stands today, to the east of the city, well outside its walls.

The west tower is Perpendicular, very simple, but the rest, nave, and a chancel long in proportion to it, has walling recognisable at once as early.

The nave is mainly of masonry blocks, with occasional courses of Roman brick. The chancel is 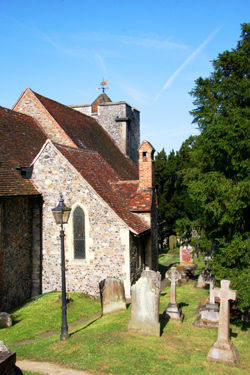 partly similar, but in the east wall with flint instead of stone; but the west half of the south wall, and an extensive patch at the east end of the north wall, are wholly built of Roman brick, carefully coursed.

The former walling is like Reculver, the latter like St Pancras, Canterbury, both 7th century churches. But is it possible that the brick walling is part of Bertha's pre-Augustinian building, which Bede believed to have been built during the time of the Roman occupation? The question cannot be definitely answered. Either this is Bertha's church, enlarged in the 7th century, or work of two periods in the 7th century.

The only feature of the earlier work is a blocked doorway at the west end of the chancel south wall. It is squared-headed and led into a tiny porticus, which has been excavated, barely 5 feet [1.5 metres] square. The round headed doorway, also blocked, further east, but also in the earliest walling, is a 7th century insertion.

It is wholly fashioned with tiles, but one can see how it was inserted into the earlier wall. The early part of the chancel south wall ends in a shallow buttress.

A cross wall has been discovered under the chancel floor, the east end of the early church. But why does the early walling go on further to the east on the north side? The west end of the north wall was largely pulled down in 1845, when the vestry was built.

The nave, like the chancel, has no early windows, but the buttresses, the pair at the south east and the single one at the north west angle, are of the typical shallow Early Saxon sort.

The semi-circular one in the centre of the south wall is presumably what remains of another of the same sort.

The west wall of the nave, where the plaster has been stripped off, has the head of a blocked early opening (a window?) about 17 feet [5.2 metres] up, and to the left and right blocked Saxon windows, the springers of their tile-turned arches visible where the heads were heighted. Perpendicular chancel arch. 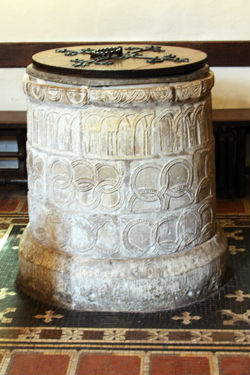 A splendid big Norman tub, made of Caen stone blocks, decorated with arcading of intersecting arches and two rows of interlocking circles, all dotted with pellets. For the circles, compare the shafts of the doorway to the Norman dormitory of the Cathedral.

He was the Speaker of the House of Commons who had to be held down in his chair to get the Petition of Rights passed; Ann Pyott, died 1753, charming, rather amateurish tablet with a Rococo urn: but no, Sir Robert Taylor designed it.