Mark became Rector of St Martin and St Paul in September 2017, having previously served as Vicar of St Luke’s, Sevenoaks in the Diocese of Rochester for ten years.

He was ordained in Canterbury Cathedral in 1996 serving his curacy in Walmer and his first incumbency as Vicar of Wingham, Elmstone, Preston and Stourmouth just a few miles down the road.

His ministry has included work as a Vocation Advisor in both diocese, a role which is very close to his heart and spells as an Honorary Canon of Rochester Cathedral and Rural Dean of Sevenoaks. He is Deputy County Chaplain for St John’s Ambulance and has held a number of other chaplaincy roles over the years.

Mark is a Kentish man by birth and is married to Clare. He has a great love of cricket (which is well catered for in Canterbury), theatre and travelling. 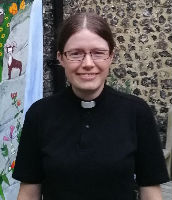 Hannah became curate at St Martin and St Paul in July 2018 having  completed her training in Birmingham at The Queens Foundation.

Hannah has previously worked with a number of charities that work with children and  families in the Canterbury area, as well as working with Christians Together.

Having grown up in Canterbury she is pleased to be coming home to serve here in this parish.